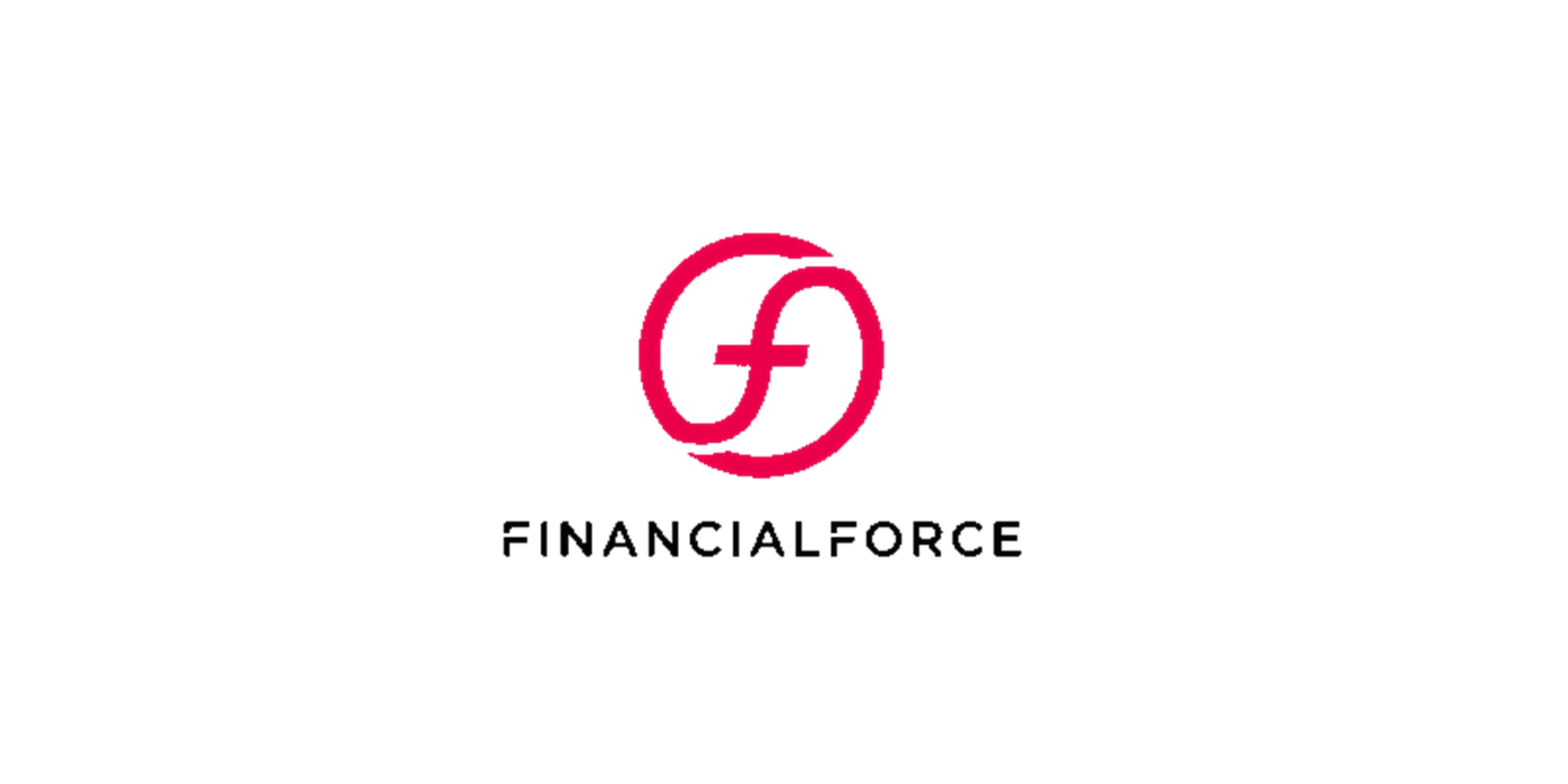 In the context of data management for organizations and their relationship with clients and partners, there are currently several options available that suit the daily organization's work. Salesforce is the market-leading and most complete CRM platform, cloud-based, which allows to manage customers and partners, sales processes, leads generation, financial management and work on many other organization areas. The platform, in addition to these base capabilities, allows the integration with external entities, through API/Web Services such as Document’s certification, ATM payments and even Banking Services.

In order to improve these Salesforce base capabilities there are applications that can be purchased and installed from the AppExchange, the Salesforce app Store, such as FinancialForce.

FinancialForce allows account management, invoices generation, cash, collection cases, accounting reports generation and many other key features for a good and correct financial management of one or more companies (On the website appexchange or FinancialForce can be found more detailed product information). However, even despite the large number of existing applications, what is available is not always suited to the vision and organizations needs being necessary adaptations/implementations and improvements to the existing ones.

In this article we exemplify a case implemented in a client, where FinancialForce was leveraged for Cash Management by automating processes and improving financial indicators.

Cash Refund – Document representing the failure of the billing attempt or the withdrawal of a Direct Debit received payment;

Allocation/Association/Cash Matching - Operation of connection between two documents that indicates that, e.g. the payment received (Cash) was used to pay the sales invoice (SIN). Uses the FinancialForce CODAAPICashMatching_7_0.Match API;

Unmatching – Unlinking operation between two documents that were previously associated as e.g. a payment received (Cash) that was paying a sales invoice (SIN) when unmatching is done the invoice becomes unpaid and the payment available to pay any invoice from the same account.

The organization, in example, uses FinancialForce on a daily basis for the financial and accounting management of contracts signed between clients and vendors, from issuing invoices or sales credit notes, sending for collection and registering payments in the system, either by Direct Debit, Bank Transfer and ATM Payment. In view of what is provided by the FinancialForce application, there was a need to improve and automate the management of the allocation of payments received with the main objective of not only reducing the accounting manual work, optimizing time and resources, reducing human errors of manual actions, adapting the process to current legal needs, and also improving the DPD indicator (Number of days that an invoice is unpaid after the due date - very important indicator for new company investors) from clients, as they had recent invoices paid while there were older unpaid invoices.

After an analysis of the organization’s data and operation method it was identified that:

Initially, the possibility of using the FinancialForce’s BackgroundMatchingService service was evaluated to perform the automatic allocation between payments and invoices, however after some validations were identified some handicaps in the service that prevented the use it:

Due to the identified handicaps for the BackgroundMatchingService, it was decided to create, from root, an automatic process that fulfilled all the intended improvements. This process should run daily and several times a day in order to catch all Cash, Cash Refund, SINs, JNLs ATM and SCRs that appear during the daily operations.

With the use of the Apex Language, an object-oriented programming language developed by Salesforce.com that allows the execution of flows and control of transactions on the Salesforce platform, the automatic process was divided into 3 Batches that correspond to 3 automatic phases of the process. This three-phase division allowed not only to sequence the process in phases that can be performed independently, but also to increase the processing speed/capacity while respecting Apex Governor Limits and FinancialForce Limits.

Direct Debit Cash Refund will now be automatically allocated to the respective Cash. The Cash Refund amount is then withdrawn from the invoices with the most recent due date of the account/contract to pay the invoices that were previously being paid by the refunded Cash.

Direct Debit (Cash) or ATL Reference (JNL) payments are now allocated to the customer’s account and contract invoices, taking as first priority the invoices with collection cases and the oldest due date as second priority.

Validations were introduced in all process phases, which in failure event an issue is created for the responsible team analysis, which allows identifying unexpected manual interactions such as manual dissociations between payments and invoices and errors from the other processes that already existed but had never been validated/identified that may affect the algorithm, such as the example of:

For the registration of all allocations/dissociations performed by the process was created a new custom object that along the algorithm is filled with relevant information by interaction, which will allow not only to have a history of the actions performed but also increase the performance of the research of the allocations to perform their dissociations (Unmatch). We have as an example the following object fields:

Example of Cash Refund for Cash 1 with an amount of 200€ that was paying the invoice SIN1. 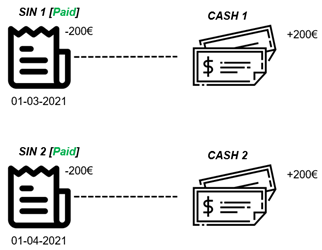 The Cash 1 for which the Refund was made (Cash Refund 1) was disassociated from the invoice that was paying SIN 1 and the same remained Unpaid. As in this case there was a more recent invoice that SIN 1 the DPD was going to increase.

Example of a Sales Credit Note for SIN 1. 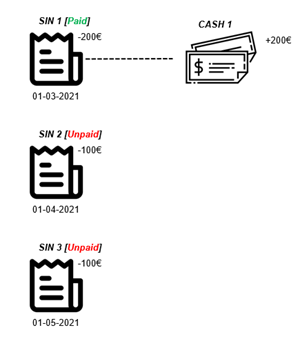 When a Sales Credit Note (SCR 1) was created for an invoice (SIN 1) if the invoice was already paid (Cash 1), a Cash Refund was manually created to return the money to the client. 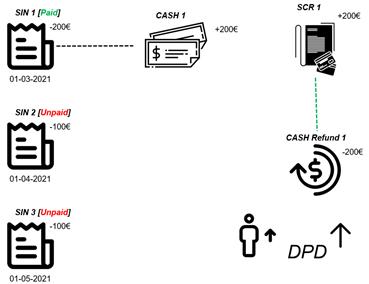 When a Sales Credit Note (SCR 1) is created for an invoice (SIN 1) the invoice is disassociated from your payments, paid with Credit Note (SCR 1) and the payment that were previously allocated to the invoice are used to pay other invoices (SIN 2 and SIN 3) of the client’s contract thus reducing the DPD, manual interaction and no more refunds of money to the client with invoices in debt. 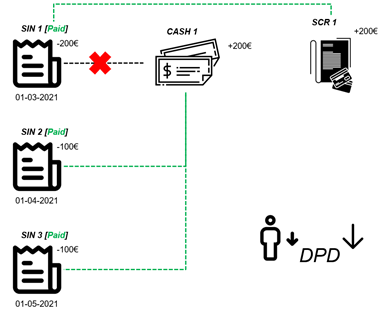 Example of a 250€ payment received.

When receiving a payment by Direct Debit (CSH 2) or by ATM Reference (JNL ATM) it was always allocated to the invoice (SIN 2) that gave its origin, and there may exist older Unpaid invoices (SIN 1) thus increasing the DPD. 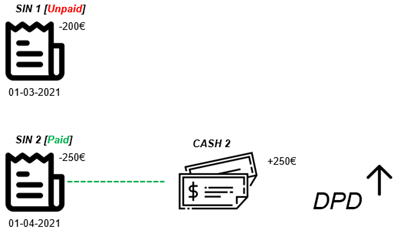 When receiving a payment by Direct Debit (CSH 2) or by ATM Reference (JNL ATM) it will be allocated to the invoices in ascending order of the due date, in this case, from Cash 2 of 250€ was used 200€ to pay SIN 1, being fully paid, and the remaining 50€ was used to pay a portion of the invoice SIN 2. With this logic we will always have the DPD indicator with the lowest possible value. 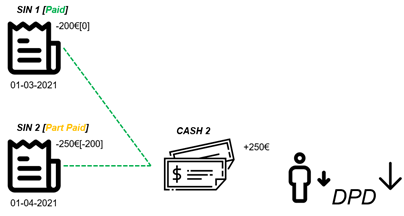 With the implemented algorithm, the FinancialForce was leveraged for the automatic Cash Management, fulfilling not only all the needs of the organization to improve the DPD indicator, release manual resources allocation, and automate the entire payment process, but also identify errors and accounting failures in the system. Currently the implemented algorithm is fundamental for the system accounting and collection operations.

Human Resources
HR Management
Talk to us, we are online